The original inhabitants of Venda are Vhangona, and Vhambedzi. Vhangona are estimated to have settled in Venda as early as the 6 th century. It is also believed that about 85% of present day Tshivenda words and vocabulary come from the original Tshingona.

It is said that the Kingdom was divided into seven districts:

These districts were ruled by District Chiefs (Mahosi):

Districts consisted of chiefdoms which were governed by Vhamusanda (Junior Chiefs) who paid tribute to Mahosi. This tradition states that one of the Vhangona Kings was King Shiriyadenga whose royal kraal was at Mapungubwe. It is not clear if this Shiriyadenga is the same Shiriyedenga of the Sanga dynasty, a Karanga-Rodzvi branch. The Sanga dynasty, in Zimbabwe’s eastern highlands, was founded by Chiphaphami Shiriyedenga who died in 1672.

Exodus: To The Promised Land

According to the Singo tradition, the Singo came from the Great lakes in Central Africa (present day Democratic Republic of Congo, Burundi, Rwanda and the western side of Tanzania). This tradition states that the Singo had a magic drum known as Ngomalungundu. This was a sacred drum of Mwali (Mwari), the Great God of the Singo. Ngomalungundu was the spear and shield of the Singo. Mwali is believed to have worked miracles with this drum which had magic and killing powers. In fear of Ngomalungundu, other groupings surrendered to or fled from the Singo killing powers.

It is said that the Singo king, when they were in Central Africa, was Tshilume (Ratshilumela). His royal kraal was known as Matongoni. He is said to have been instructed by Mwali to move southwards. Mwali told him that he should use Ngomalungundu to subjugate the people whose land he would conquer. The Singo left the Great Lakes for Venda. They reached Vhukalanga (Zimbabwe) and settled for a while amongst Vhakalanga (Karangas) in present day Matabeleland. The king of Vhakalanga at the time was Tshivhi who was feared and highly respected by his people and neighbouring nations. Tshilume sent messengers to the Tshivhi to tell him not to worry about the presence of the Singo since the Singo were on their way to the south. But Tshivhi’s intelligence officers had already warned him about the Singo and their magic drum. So when Tshilume’s messengers arrived at Tshivhi’s palace to extend a hand of friendship, Tshivhi thought that they were there to attack him. Tshivhi’s men attacked Tshilume’s messengers. Tshilume’s messengers went back to their king to tell him that they were attacked by Tshivhi’s men. Tshilume dispatched his warriors to go and attack Tshivhi with the help of Ngomalungundu. It is said that a lot of Tshivhi’s warriors were killed and Tshivhi was captured and taken to Tshilume. Tshivhi apologised to Tshilume and was set free. Tshivhi went back to his palace where he was later killed by a group of women who were angry that their husbands and sons were killed as a result of Tshivhi’s decision to attack the Singo. This is where the following verse in one of Tshivenda poems came from:

(Tshivhi was a great lion that was feared by men, but was killed by women. Men were killed by Ratshilumela (Tshilume) of Mwali)

The Singo forgot that they were supposed to move to the south and settled permanently in Vhukalanga. They even intermarried with Vhakalanga and Vhanyai. This incensed Mwali and he punished the Singo by sending lions to kill a lot of people, including royal princes and princesses. King Tshilume went to Mount Mubvumela to perform religious rituals to appease Mwali, but he never returned.

After some days Mwali is said to have summoned vhotshifhe (high priests) to Mount Mubvumela. There he told them that Tshilume would not be coming back since the people had disobeyed Mwali’s instructions by intermarrying with Vhanyai and Vhakalanga and settling permanently amongst them. He told vhotshifhe that Tshilume’s only surviving son should be the new Singo king. He was given the title of Tshikalange since he was crowned king of the Singo in the land of Vhakalanga.

The Singo moved southwards and reached the banks of Vhembe River (Limpopo River). They settled in the Vhembe valley awaiting further instructions from Mwali. Unfortunately King Tshikalange died of malaria before crossing to the other side.

Hwami was, according to this version, succeeded by Dimbanyika. Dimbanyika was a hunter. One day he went out hunting but never came back. But his two dogs went back home. A search party, led by one of his dogs, was dispatched the following day to look for him. The dog led the search party to a cave. The opening of the cave was filled with huge rocks which were impossible to move. After trying unsuccessfully to move the rocks, they were addressed by Dimbanyika. He told them to stop trying and that the cave would be his grave. He instructed them to take Ngomalungundu and move the capital since nobody would be allowed to live on Mount Lwandali. He forbade people from eating fruits from Lwandali. He also gave instructions that the son of Rambwapenga and his descendants must remain on Mount Lwandali to tend his grave and to be guardians of Lwandali.

Mwali, the Great God of the Singo made contact with Tshishonga, the Chief Priest and gave him a golden pipe which had similar powers to those of Ngomalungundu.

Through conquest the Vhangona and Vhambedzi came to revere and fear Ngomalungundu. They regarded this drum as the Voice of their Great God, Raluvhimba. By the late 19th century Vhavenda had to come to think of Raluvhimba and Mwali as interchangeable names for the same deity, although they had once been separate.

The Singo were, with time, absorbed culturally and linguistically by Vhangona and Vhambedzi clans, the clans they conquered. The conquerors’ descendants owe much of their present identity to the earlier inhabitants of Venda, Vhangona and Vhambedzi. It is believed that about 85% of present day Tshivenda words and vocabulary come from the original Tshingona. But the conquerors also transmitted a great number of Karanga traits.

Today nobody knows where Ngomalungundu is. Some say that King Thohoyandou took it with him when he disappeared without trace. Some people believe that Thohoyandou crossed the Vhembe River into Vhukalanga, and that is where he died. A museum in Harare, Zimbabwe, has the remains of an old drum, and the curator claims that it’s Ngomalungundu. The curator says that the drum was donated to Bulawayo Museum by a Venda-speaking man in the 1930s. 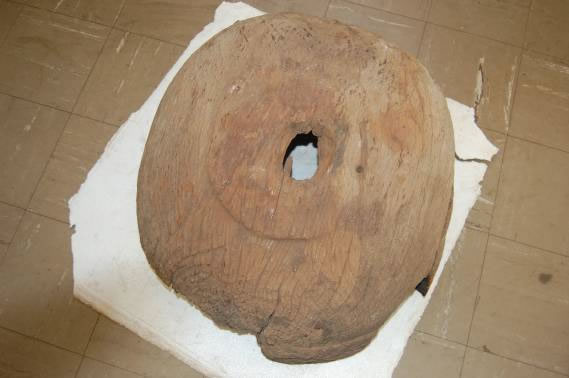 The remains of an old drum at Harare Museum. The curator says it’s Ngomalungundu. (picture courtesy of Mr Charles Mphephu).