Vhavenda, like other African nations, believed in the existence of a Supreme Being long before the arrival of European missionaries. The Vhavenda name for God was/is Nwali (Mwali). He was also known as Raluvhimba.

Nwali was the provider of rain which Vhavenda depended on for their survival. He was also the protector and defender of Vhavenda.

It was believed that Nwali used to visit his people and that his arrival was preceded by the sudden cracking of thunder up to the sky. The people would look up in the sky, ululating and dancing while welcoming the arrival of Nwali. In 1917 a meteor, which bust during daytime, made a thunderous noise along the Soutpansberg mountain range and led to people believing that Nwali was visiting Venda.

Vhadzimu are ancestors. According to Vhavenda cultural standards, ancestors are those people who died at a mature age or as parents. Ancestors are not on the same level as Nwali, and are not in competition with Nwali. It is believed that every mortal human being is a sinner and that human beings have no right to communicate directly with Nwali, who is holly. Living beings can only send their messages to God via the ancestors since ancestors are immortal beings and are no longer capable of sinning.

Ancestors are intermediaries between Nwali (God) and mortal beings. Ancestors deliver people’s prayers, offerings and messages to Nwali. They also deliver Nwali’s blessings and messages to living beings. So, the offerings that are performed to venerate, to appease, to make offerings to the ancestors, to thank Nwali, or to ask for blessings, are a way of maintaining the relationship between living beings and the ancestors to ensure that prayers and offerings are delivered to Nwali and that Nwali’s blessings are received. But Westerners misunderstood this relationship and referred to the sending of prayers to God (Nwali) via the ancestors as ancestral worshipping.

Are Zwifho na Zwitaka (Sacred Sites) Portals To The Other World?

In his well-researched book, Supernatural (Meetings With the Ancient Teachers of Mankind), Graham Hancock demonstrates that thickets, springs, wells and caves were, around the world, widely believed to serve as portals to dimensions or realms. Hancock gives, amongst others, the following as examples of belief and experience in the possible existence of the other world or dimension:

Africans also believe in the existence of another dimension or realm. All African cultures in South Africa believe that people chosen to be trained as great healers are taken to another dimension by the spirits. They are believed to be taken underwater since springs, rivers, waterfalls, wells, and pools are amongst the portals connecting our world to other dimensions.

In 1979, boys from Muledane village in Thohoyandou were fishing on the banks of Mvudi river. They claimed that while fishing they saw an unknown man with huge dreadlocks that almost touched the ground emerging out of the water and greeted them. The boys were filled with fear, and fled to the village where they told some elders, including the village chief, Mavhina, what they had witnessed.

It was agreed that the boys should go back to the fishing spot where they saw the man who frightened them. While the boys pretended to be fishing again, the elders hid in the bushes to see if the man would resurface. After a while, the man allegedly resurfaced from under the water to talk to the boys. The elders that were hiding recognised the man as a local who had disappeared without a trace in 1963. When they tried to apprehend him, he disappeared back into the waters of Mvudi river.

Word spread like wildfire that a local man that had been missing for sixteen years was spotted surfacing from the depths of Mvudi river and that his dreadlocks almost touched the ground. The man’s family consulted diviners who told them that the man had been taken to the other dimension and had been receiving training as dzolokwe / dzembelekete) (greatest healer and diviner). The family were told that the man was ready to come back and practice what he had been taught, and that for him to come back the family needed to perform certain rituals on the banks of Mvudi river.

Rituals the family were told to perform included the beating of spiritual and rhythmic drums, performances of ritual dances, libation (using Mpambo brew), as well as the slaughtering of goats and oxen to encourage the man to get out of the waters of the river.

Rituals were performed for almost a year, and the spot where the man was expected to surface became some kind of a tourist attraction or picnic spot for a while. There were daily updates on the story on the then Radio Thohoyandou and Radio Venda, as well as monthly reporting by Mvelaphanda magazine. But the man never surfaced. Eventually, the family gave up and interest in the story faded.

Some elders and cultural experts had warned, when the performance of rituals started, that the public performance of rituals would scare the man from surfacing. They had also stated that since he had disappeared years earlier, he probably had no idea how long he had been gone since he had been taken to another dimension where the passage of time was far slower than the passage of time on Earth. He could have been surprised by the modernisation that had taken place in a period he thought were a few minutes since he had been gone. (It is important to note here that the town of Thohoyandou was built from 1978, fifteen years after the man allegedly disappeared. When he was spotted in 1979, a lot had changed).

This story demonstrates that belief in portals into other dimensions, as well as the passage of time in those dimensions is a universal one.

There are numerous sacred sites in Venda, referred to as Zwifho and Zwitaka. These are mostly caves, springs, rivers, waterfalls, pools, wells, gorges, thickets, dense forests, and lakes. These sites have traditionally been regarded as portals to the other world or dimension.

Some of the shrines are regarded as Zwifho zwa Nwali (Nwali’s Shrines). Tshifhe (priest) is the only person allowed to receive messages from Nwali and to communicate people’s wishes to Nwali. Each shrine had its own Tshifhe.

The best known Nwali shrine is at Makonde. This is where Tshifhe Muhulu (senior priest) resided. Oral history has it that the Makonde shrine was established by the Vhambedzi. The Vhambedzi kingdom stretched from Masvingo, Zimbabwe to Vhumbedzi, North-Eastern Venda. The Vhembe River (Limpopo River) was never a barrier between the people living on either side of the river. The Vhambedzi royal kraal was in Malungudzi (Marungudzi) in Masvingo. The Vhambedzi were renowned rainmakers.

The two Vhambedzi groups paid tribute to the King in Malungudzi. But later on great distances and the disintegration of Vhambedzi settlements led to the establishment of small autonomous groups at Ha-Luvhimbi and Mianzwi, and other lesser-known units at Ha-Mukununde, Tshikweta, and Masetoni. But whenever the South African Vhambedzi failed to cause rain to fall, they would send their messengers to Malungudzi where the Malungudzi Mbedzi would contact Nwali on behalf of Vhambedzi south of Vhembe.

The Donwa shrine at Ha-Matsa was, like most Venda shrines, a Ngona shrine and had been established long before the Singo conquest. Senior Singo chiefs and kings were not allowed to enter the Donwa shrine.

Other sacred sites still revered and utilised for thevhula (religious rituals) include: 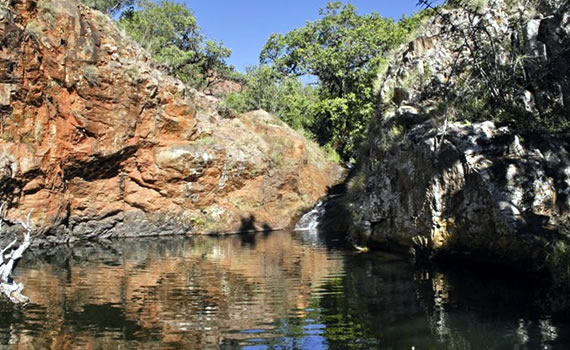 Mashovhela Rock Pool. Mashovhela – the place where drums can be heard. Mashovhela is one of the most sacred places in Tshivenda culture. This sacred site is still used by diviners and vhotshifhe (priests) in rain-making ceremonies.

Venda’s sacred sites are under threat from developers and unscrupulous business people. Some mahosi (chiefs) have in recent years decided to develop areas where sacred sites are situated without consulting and seeking permission from the custodians of the sites. A good example is that of Phiphidi Waterfalls where the Tshivhase Development Foundation Trust tried to turn the site into a holiday resort. The Tshivhase Development Foundation Trust is an organisation registered under the name of Khosi Midiyavhathu Kennedy Tshivhase and the Tshivhase Traditional Council.

According to the Ramunangi clan, tradition dictates that the clan should gather at Phiphidi Waterfalls every year in September (traditionally the beginning of a new year) to perform religious rituals. Preparations include the brewing of Mpambo (sorghum beer brewed for religious rituals) which is consumed by all clan members prior to the pilgrimage to the sacred site. Then on a night chosen by the elders, following signs a such as mist, a selected group of spiritualists accompanies the senior Makhadzi (the clan’s senior aunt) to the sacred site to perform rituals which are kept secret from the rest of the clan. When they are done with the rituals, they hear sounds such as the beating of drums and tshikona music coming from under the water. The whole area is covered in mist. That is a sign that Nwali has heard their prayers and it will rain. And when it rains, all the people of the land, and not only the people of Ramunangi, benefit.

Dzomo la Mupo wants mahosi and business people to respect zwifho and zwitaka, the same way they respect temples, synagogues, churches, and mosques. It warns that violating sacred sites could lead to severe droughts and untold miseries being visited upon innocent people. According to Dzomo la Mupo, sacred sites are places where evaporation that leads to rain occurs. If pools such as Phiphidi Waterfalls are not protected, there would be no rain.

The occurrence of a solar eclipse, Mutshakavhili, in Venda was/is regarded as a visit by Nwali. Mutshakavhili literally means the sun that sets and rises twice in one day. People were not allowed to watch the event since it was believed that Nwali would be passing all over Venda on His way to His shrine in Makonde. It was believed that Mutshakavhili happened when Nwali was angry and that He had visited Venda to tell His people what He was not happy about.

People in different areas would then set dates for religious ceremonies, thevhula. Mpambo would be brewed for the ceremonies. Bulls would be sacrificed on the day(s) of the ceremony and religious rituals would be performed to ask for forgiveness. Vhotshifhe would then deliver Mpambo, food, and anything that Nwali requested to the different shrines in Venda. All the offerings had to be placed at the entrances to the shrines. They would then wait to see if Nwali had accepted their apology. Fires would then spring from the shrines and consume all the offerings. Vhotshifhe would then go back to all chiefdoms to deliver good news. Thereafter people all over Venda would feast and tshikona would be performed. Nwali would then leave Mount Makonde and visit the other shrines on His way back to Malungudzi. 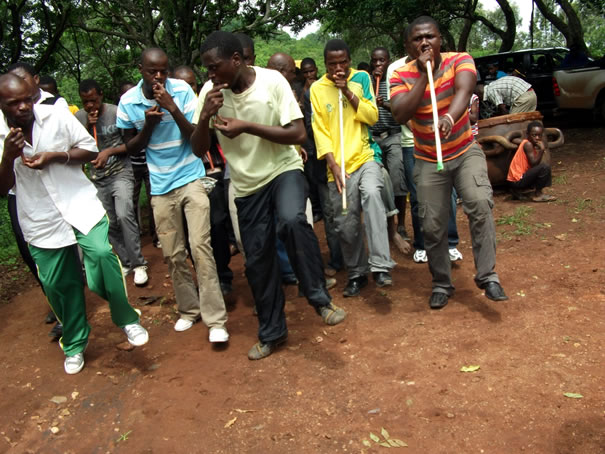