Dzata is regarded as the spiritual home of Vhavenda. This is due to the fact that Dzata is the ancient capital of Venda. This is where the Singo conquerors first settled when they conquered Venda.

The Singo settled at Dzata I (one), on Mount Lwandali which overlooks Dzata II. Dzata I was abandoned after the death of King Dimbanyika. Oral history has it that Dimbanyika was a hunter. One day he went out hunting but never came back. But his two dogs went back home. A search party, led by one of his dogs, was dispatched the following day to look for him. The dog led the search party to a cave. The opening of the cave was filled with huge rocks which were impossible to move. After trying unsuccessfully to move the rocks, they were addressed by Dimbanyika. He told them to stop trying and that the cave would be his grave. He instructed them to move the capital since nobody would be allowed to live on Mount Lwandali. He forbade people from eating fruits from Lwandali. He also gave instructions that the son of Rambwapenga and his descendants must remain on Mount Lwandali to tend his grave and to be guardians of Lwandali. 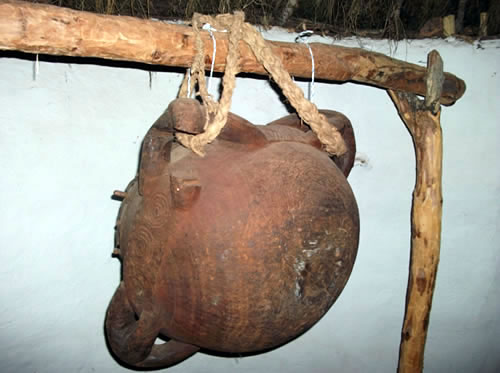