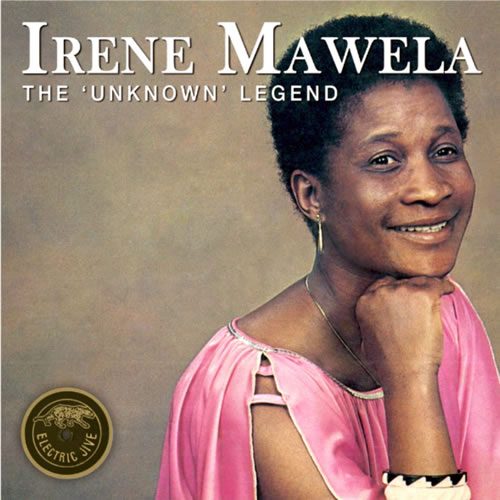 Known amongst some of her supporters as ‘the Miriam Makeba’ of Tshivenda music, Vho-Matodzi Irene Mawela is a legend. Although she may not be well-known amongst non-Venda speakers, her song writing skills and sweet voice have, for more than 50 years, added a golden touch to many well-known songs by well-known solo artists and groups. She has recorded and performed with the Dark Sisters Killingstone Stars, Black Sea Giants, The Sweet Sixteens, The Telegram Specials, Brit’s Sweethearts, Young Stars, Radio Stars, Pretty Dolls, Beauty Queens, Irene and The Sweet Melodians, Mgababa Queens, Izintombi Zomoya, The Zebras, Mahabula Joza, and Mahotella Queens.

Vho-Irene Mawela was in Moroka, Soweto, in 1940. Her parents had moved from Venda, before she was born, to settle in Soweto. At that time, due to the promotion of tribalism by successive Boer governments, Vendaspeaking and Tsonga-speaking people were undermined and despised by other African ethnic groups in Johannesburg. In order to hide her Venda identity, and due to the fact that there were no primary schools that taught Tshivenda in Johannesburg, Irene’s parents enrolled her in a Sesotho primary school. She, however, spoke fluent Tshivenda at home.

Raised in a Catholic family, Irene regularly attended church where her keen love for singing grew. By her teens, she was a singer in the Sweet Voices, a chorus that sang at wedding ceremonies in Soweto. It was with this group that Irene began perfecting her uniquely sweet lead harmony, a talent that earned her many followers. She was 17 years old when she was spotted by Rupert Bopape at a wedding party in Soweto singing with the Sweet Voices.

As an artist attached to EMI, Vho-Irene composed songs for fellow musicians. One of these was ‘Mamorwesi’ which featured Joyce Mogatutsi. The majority of her material was recorded in isiZulu and Sesotho. This was due to the fact that record company executives insisted that popular music needed to be recorded in isiZulu and Sesotho for it to attract buyers. Irene had, however, a burning desire to record songs in her onw language, Tshivenda.

Record companies at the time had a policy that restricted the number of songs a composer could write and compose per year. It has been claimed that this was a policy created by producers in order to keep their artists in place. Irene therefore had to compose under different pseudonyms such ‘Irene Nhlapo’, ‘Sarah Ngwenya’

Troubadour was bought Trutone in 1969. Trutone was itself later bought by Teal Records in 1971. Irene became part of the Teal roster. Irene finally realised her dream of recording in Tshivenda. Her first Tshivenda song was titled ‘Rosina’. The lyrics were:

She later recorded the Tshivenda nursery rhyme (tshidade) her mother using to her when she was young. The song was titled ‘Ndi a la’:

Irenene reunited with Rupert Bopape in 1972. She joined Bopape’s stable Mavuthela Records and became a member of a group known as Izintombi Zomoya. She later married Rupert Bopape in the mid-1970s. She then moved from Johannesburg and settled in Tzaneen, Bopape’s hometown. She, however, continued to compose and record music under different names, such as Irene and The Sweet Melodians, and Irene and the Zebra Queens. She would often travel from Tzaneen to Johannesburg to record her music.

West Nkosi took over as the executive head of Mavuthela when Bopape retired in 1977. Irene worked with West Nkosi and produced her first LP under the name ‘Irene and The Sweet Melodians’. Among the tracks was a Tshivenda track titled ‘Mudavhini’.

In the late 1970s, Vho-Irene helped Venda artists, Mashonelo Alphius Ramavhea, Eric Mukhese, and Elvis Mandiza (Mudau) record their own LPs. She influenced the way their sounds were developed, sang as a backing vocalist and wrote a few songs for them. Her sweet voice can be heard in the following tracks:

In late 1982, Irene was given permission to record her first LP completely in Tshivenda. Lucky Monama, one of Mavuthela’s public relations officers and also the chief producer of the company’s traditional output, produced the 10-track album – which incidentally was the first material to be credited to ‘Irene Mawela’ rather than a recording name like ‘Irene and The Sweet Melodians’. The album had, amongst others, the following tracks:

In 1983, Vho-Irene recorded her second commercial Tshivenda LP. It had well-known and loved songs such as:

Irene and Bopape separated in 1984. Shen left Tzaneen and returned to Muraleni, Ha-Sinthumule. In the 1990s she recorded a hit titled Guvhukuvhu, a tribute to the beauty of Phiphidi Waterfalls. A waterfall is known as guvhukuvhu in Tshivenda. She has also recorded new material such as ‘Athilaiwi’, ‘Fhumulani’, ‘Mutale’, ‘Ndo Vhuya Venda’, and ‘Tshigombela’.

Vho-Irene Mawela has won the following awards as a recording artist:

Vho-Matodzi Irene Mawela is truly a legend that should be honoured and celebrated.