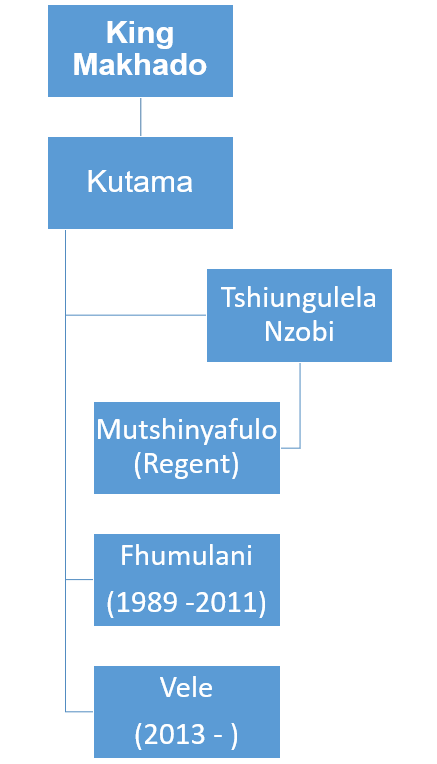 Ha-Kutama is a chiefdom situated 25 kilometres to the west of Makhado. It is made up of eight (8) villages.

The chiefdom is named after Kutama, the third-born son of King Makhado. Kutama was the younger brother of Alilali Tshilamulela (Mphephu), and Sinthumule.

Kutama died and was succeeded by his son, Tshiungulela Nzobi. When Tshiungulela died, his son, Fhumulani, was too young to take over as the Khosi of Ha-Kutama. Fhumulani’s paternal uncle, Mutshinyafulo, was appointed as a regent.

When Fhumulani was ready to take over, Mutshinyafulo, refused to hand over the chieftainship. There was drama involving allegations of witchcraft and flying stones that targeted Fhumulani and his siblings. It was reported that some of the stones would isolate and hit Fhumulani’s sister when she was sitting with her classmates in the classroom at Kutama High School.

There were also allegations of fires that would ignite from nothing, and these fires were said to be haunting Fhumulani and his sibings. It was believed that the stones and fires were the works of Mutshinyafulo to intimidate and stop Fhumulani from becoming the chief of Ha-Kutama.

The dispute was finally resolved in 1989 when the Thohoyandou High Court ruled in Fhumulani’s favour. Fhumulani became the Khosi of Ha-Kutama in 1989. But the fires and stones continued for a while.

Fhumulani decided to part with tradition by refusing to marry a dzekiso wife. He only had one wife that he chose for himself. His decision not to marry a dzekiso wife came back to haunt the Kutama area when Fhumulani died in 2011. After a period of mourning, the Kutama Royal Council decided to install Fhumulani’s brother, Vele Kutama, as a the new Khosi of Ha-Kutama. This was despite the fact that Fhumulani was survived by his son, Mpho Kutama.

The decision by the Kutama Royal Council to install Fhumulani’s younger brother, instead of Fhumulani’s son, as the Khosi of Ha-Kutama was challenged by Mpho and his uncle, Andries Kutama. They argued that Mpho Kutama, as Fhumulani’s only surviving son, should succeed his father.

The High Court dismissed Mpho and Andries’ arguments, regarding Vele’s paternity, as mere speculation. The Court accepted the Kutama Royal Family’s argument that Fhumulani’s refusal to marry a dzekiso wife meant that his sons could not succeed him.