Mount Luvhola got its name from its peak which is shaped like a bee sting. A bee sting is known as luvholela in Tshivenda. From the word luvho(le)la came the name Luvhola.

After Davhana, the first born son of King Rasithu Ramabulana, was defeated by Makhado in the war of succession, he fled to Luonde and sought refuge from Joao Albasini. Albasini was a Portuguese trader who came from Mozambique. He was accompanied by Tsonga refugees who fled Mozambique after the war of succession broke out for the Tsonga-Shangaan kingship in Mozambique. The fight was between Mawewe and Mzila. Albasini appointed himself the white chief of the Tsongas who fled Mozambique. Albasini was appointed Native Commissioner for Venda by the Transavaal Republic, before Venda was conquered. His position over Vhavenda was therefore not recognised by anybody. Albasini settled, without Khosi Matidze’s permission, at Luonde.

Makhado wanted Albasini to deliver Davhana to him, but Albasini refused to do so. Davhana, who had not given up on becoming the king of Venda, tried many times to attack Makhado. Albasini also did not like Makhado because the king did not recognise his authority and had forbidden his people from paying taxes levied by Albasini.

After the destruction of the Boer settlement of Thivhalalwe (Schoemansdal) and the expulsion of the Boers led by Paul Kruger in 1867, Davhana, Albasini and Boer authorities formed an alliance to oust Makhado from the throne. Davhana promised Albasini and the Boer authorities that they would have control over the whole of Venda if he (Davhana) became king of Vhavenda.

Davhana and Albasini approached the Swazi for military assistance. Their ultimate objectives were quite simple. Makhado’s defeat would enable Davhana to regain the Vhavenda throne. Albasini would feel more secure. At the same time the Boers would return to Venda.1

The Swazi impi, directed by Albasini and Davhana to go to Tshakhuma, was spotted and the local residents were able to retreat to their fortress on Mount Mangwele. There were caves with beautifully constructed stone walls. A section of the cave, meant for protection of the khosi was to the rear of the sanctuary. The area for the ordinary rank and file was near the entrance. They had to defend their ruler.2

The Swazi impi were defeated by Tshakhuma fighters on Mount Mangwele. Tshakhuma women, such as Mudzunga Madzivhandila (who was Khosi Tshivhase’s daughter and also the wife of Khosi Raluthaga Madzivhandila) and Nyatshivhuyahuvhi, a princess of Tshivhazwaulu, participated in the fight against the invaders and killed a lot of them. Mudzunga and Nyatshivhuyahuvhi distinguished themselves as outstanding fighers in the battle of Mangwele3

The defeated Swazi returned home. When they passed through Bopedi, they were ambushed by King Sekhukhune’s warriors who further decimated them. According to Professor Mphaya Nemudzivhadi, no oral sources could provide any definitive information as to whether there was any arrangement between Makhado and Sekhukhune concerning this episode. What is known is that King Makhado and King Sekhukhune were on good terms as they regarded each other as brothers. The defeat which the Swazi sustained at the hands of the Venda enhanced Makhado’s esteem throughout Venda.

The defeat of the Boers and the Swazis by Makhado led to Davhana finally accepting that he would never dethrone Makhado. Davhana left Luonde, crossed Muhohodi and Luvuvhu rivers and settled at Mpheni village on Mount Luvhola. King Makhado did not pursue Davhana due to the fact that in terms of Tshivenda rules of combat, an enemy that fled and crossed a river as big as Luvuvhu was not supposed to be pursued. Davhana had already crossed Muhohodi and Luvuvhu rivers into Luvhola, and this was a demonstration that Davhana had lost the war of succession. Makhado, however, strategically placed Mahosi loyal to him in places surrounding Luvhola to monitor Davhana’s activities and to guard against any possible attacks from Davhana.

Davhana settled at Mpheni on Mount Luvhola and reluctantly acknowledged Makhado as the king of Venda. It is said that Davhana sent messengers to Makhado in 1870 to plead for peace and to state that Davhana was acknowledging Makhado as the king of Venda. Makhado responded by saying “u si nthumele tshira ngauri wo luvha”, meaning ‘don’t you ever provoke me now that you have acknowledged me as you king’. That very year, Makhado’s wife, Dombo (the daughter of Raluthaga Madzivhandila) gave birth to Makhado’s second son who was named Sinthumule, from ‘u si nthumele tshira’

Davhana was ordered to stay south of Muhohodi and Luvuvhu rivers and to never venture north of these rivers. Davhana still harboured ambitions of being king despite the fact that he had acknowledged Makhado’s authority. Makhado also did not trust Davhana. To ensure that Davhana was completely surrounded by Mahosi who were loyal to Songozwi, King Makhado strategically placed his brothers and cousins as Mahosi (chiefs) in the following areas:

Venda-speaking communities were forcibly removed from Old Mpheni and Luvhola in 1966/67 to make way for a timber plantation. Vhavenda from villages around Mount Luvhola, known today as Chabani, Njakanjaka, Shirley, Lemana, Mbokota, etc were also forcibly removed in 1966/67. This was after these areas were, in terms of the apartheid’s Group Areas Act, declared Tsonga-Shangaan areas and incorporated into the newly created Gazankulu Bantustan. 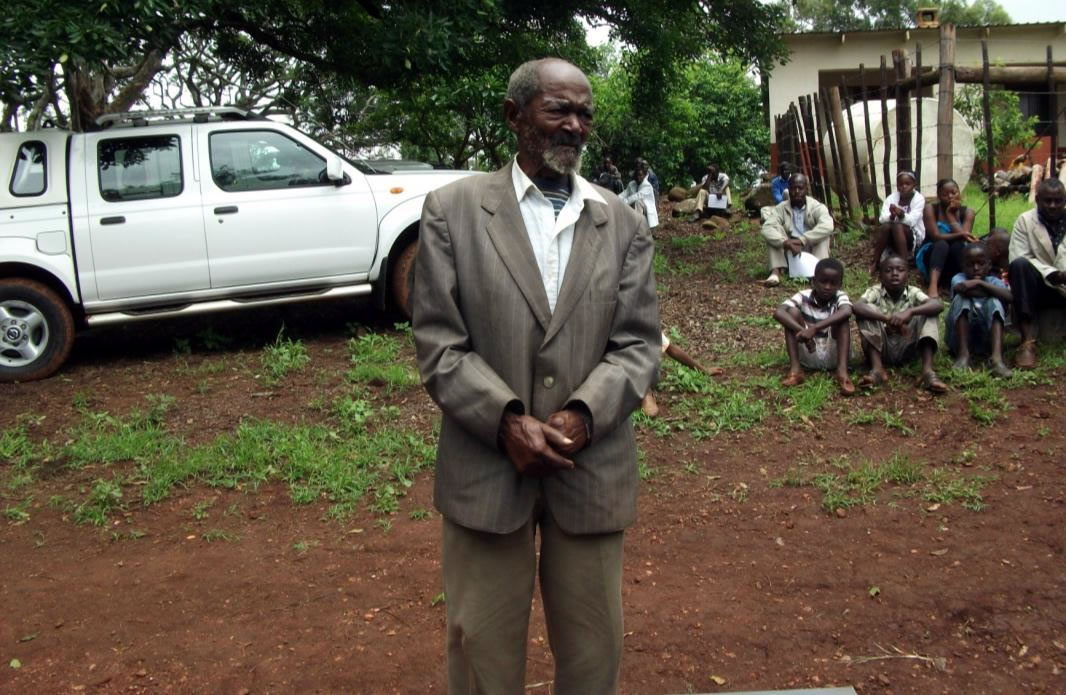 Mr William Sinugu, one of the senior members of Mpheni-Luvhola community who were forcibly removed from their land by the Boers in 1966/7. The photo was taken during the ceremony to unveil the tombstones of Davhana/Nesengani, Ramphaga and Mukwevho families on Mount Luvhola on 18th December 2010.

It is said that in 1977 some people from Chabani village illegally visited the Mukwevho shrine on Mount Luvhola. These people are alleged to have disrespected the shrine and interfered with some holy clay pots, spears and other items that are/were not supposed to be interfered with. Some Vhakwevho elders warned them that they would suffer the wrath of the ancestors. That very night heavy rains fell on Mount Luvhola. Huge rocks fell from Mount Luvhola and rolled down at a blistering pace and destroyed homesteads at Chabani village at the foot of Mount Luvhola. The heavy rocks were accompanied by mud and water coming from the mountain. A lot of people and livestock perished. Some dead people and animals were found as far afield as Tavha River (Letaba). The final death toll is not known, but the disaster was seen by locals as the disaster of the century. The disaster led to one Venda composer/artist composing and recording a song with the following words:

Although scientists believed that the mudslide happened as a result of heavy rains on Mount Luvhola, locals (both Venda and Tsonga-Shangaan speakers) believed that the disaster was the wrath of the ancestors. The homesteads that were destroyed were not rebuilt, and the ones that survived moved further south to avoid future disasters and to be as far away from the shrines as possible. Even today the Mukwevho and Davhana shrines on Mount Luvhola are highly respected and feared. The shrines are referred to by many people as fhethu ha Vhadzimu (place of the ancestors).